The Mustangs celebrate after taking control with five runs in the sixth inning.

The Merritt Island Mustangs have faced most of its toughest competition away from home this season, and the team has proven itself true road warriors. On Tuesday night the club faced another tough challenge in the 6A-14 champion Suncoast Chargers, and once again the Mustangs proved up to the task. Behind a five-run sixth inning and a complete-game shutout from left-hander Chase Victor, Merritt Island earned a 5-0 victory in a 6A regional quarterfinal at Suncoast High in Riviera Beach.

Merritt Island (21-6) will now travel to face district rival Eau Gallie, after the Commodores won and advanced with a 12-0 win over Port St. Lucie on the other side of the Region 4 playoff bracket. It will be the fourth meeting of the year for the two clubs, with Eau Gallie holding a 2-1 lead in the season series.

Alex Nigh with an RBI squeeze bunt to put Merritt Island on the scoreboard 1-0 in the top of the sixth.

“We’ve played in a lot of tight games and I think some of our scheduling early in the season prepared us for a playoff game like this,” Mustangs manager Greg Plecki said. “Suncoast made some really nice plays; their center fielder made a really great play and that pitcher is tough. He locates, throws the breaking ball for a strike and also his changeup. He’s going to be really good and I am just glad to get out of here with a win.”

The outcome was up in the air over the first five innings, as the two sides were locked in a scoreless stalemate against two tough left-handers in Victor and Suncoast starter Tyler Lavery. While the offenses were successful in putting runners on in nearly every frame, stringing hits together to score any base runners proved far more difficult. Lavery was also backed by a spirited defense that made some big plays, most notably when center fielder Michael Meehan dove out to rob Joe Johnson of a base hit in the fourth.

That challenge did not get any easier even as the Mustangs started to put a rally together. Jake Barrett lined a single past first base leading off the sixth, but was then erased when Suncoast catcher Jack Virden gunned the ball to second base on a sacrifice bunt that allowed Jacob Bogle to reach safely to first. Johnson worked a walk and a passed ball allowed both runners to advance into scoring position.

Alex Nigh then drove in the winning run on a suicide-squeeze play that went for a base hit. Ricardo Diaz followed with a liner to center that loaded the bases and turned the order over for the fourth time. Connor Allen then delivered a big hit on a liner past third base that drove in two and put runners on the corners.

Merritt Island's Chase Victor discusses his night on the mound to lead the Mustangs to a 5-0 victory.

“He got me behind in the count my first couple of at bats and had me swinging at his pitches, so I sat curveball that time and swung at my pitch and barrelled it up,” Allen said. “It felt pretty good, and knowing who was coming up next made it feel even better.”

The next batter to the plate was senior shortstop Brady McConnell, a future Florida Gator who had a solid day both at the plate and in the field. McConnell jumped on a 1-0 offering and crushed it deep over the left fielder’s head, racing around the bases for a triple that sent in both base runners for the final, back-breaking runs.

“Going in there with five runs on the board and Chase on the mound, we were going to be fine and we knew that,” McConnell said. “Getting a lot of runs there at the end definitely helped, because I think it helped Chase on the mound to feel more comfortable. It was just a great feeling all around.”

As the Merritt Island lineup worked through the order a few times, the players made necessary adjustments to find success late against Lavery.

“Just knowing that he’s not going to throw me a pitch that is going to be great to hit, we kept the approach of looking to opposite field and adjusting to the ball coming in,” McConnell said. “He was throwing a lot of off-speed, and I think we had all better approaches as the game went on. We started to swing at our pitches instead of his pitches.”

After taking the lead, the final six outs were Chase Victor’s to secure. The southpaw locked in and focused, unshaken by any base runners over the final two innings. The defense did its part as well, as Bogle hauled in a liner to end the sixth and McConnell snared another hot-shot line drive for the first out of the seventh. Bogle secured a pop fly on the shallow right field grass for the final out that sparked the celebration and advanced Merritt Island into the next round of the playoffs. 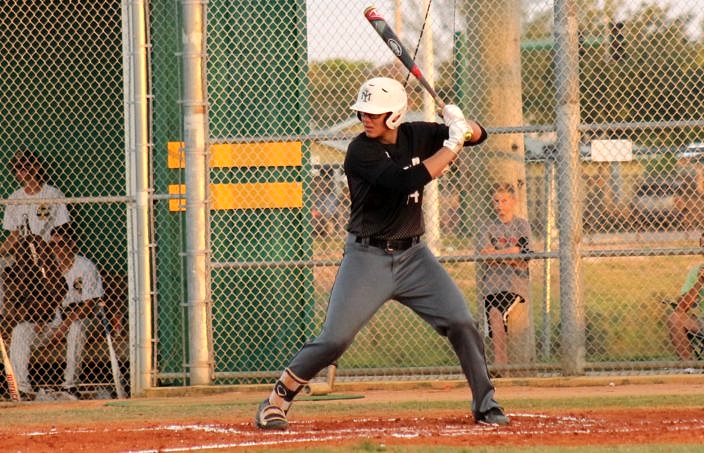 Connor Allen had a two-RBI single that helped break things open in the sixth.