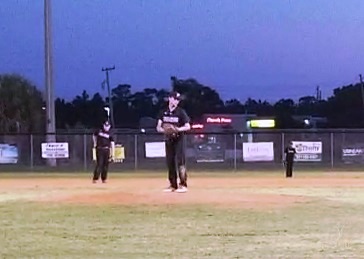 Isaiah Schier struck out 13 in the complete-game effort.

Senior Eric Garcia connected for a solo home run with two outs in the bottom of the eighth inning, lifting the Palm Bay Pirates to a 2-1, walk-off win over Bayside in Monday’s 6A-13 quarterfinal playoff. The dinger completed the comeback, after the Pirates rallied to tie the game in the bottom of the sixth inning.

Palm Bay (15-11) will now take on the district’s top seed, Merritt Island, in a semifinal on Tuesday night. The winner of that game will advance to the 6A-13 championship against the winner between Tuesday afternoon’s showdown between Eau Gallie and Rockledge.

Freshman Isaiah Schier went the distance on the mound to earn the complete-game victory. Schier only allowed four hits and a walk, while recording 13 strikeouts. He improved to 4-5 on the season while also adding his third career complete game.

It had not been the most memorable day for Garcia prior to the eighth, as he had gone hitless in three at bats. But the beauty of baseball is that one swing of the bat changed his entire memory of this day, while keeping the season alive for him and his teammates.

“I was expecting fastball the whole time, and got one outside so I went with it and drove the ball opposite field for a home run,” Garcia said.

Ben Kraemer delivered the other big hit on the night for Palm Bay, smacking a triple deep to center leading off the bottom of the sixth. The Bears (5-18) nearly got out of the jam, as starter Andrew Walters recorded a pair of strikeouts. A passed ball allowed Kraemer to score the tying run and set the stage for the final dramatics.

Walters also had a great night for his team. The right-hander struck out 14 while allowing only three hits in seven-and-a-third innings of work. Paul Feckovic singled and scored on an RBI from Eric Feckovic in the top of the fourth for Bayside’s lone run.