Melbourne Shuts Out Viera 4-0 For 7A-6 Championship 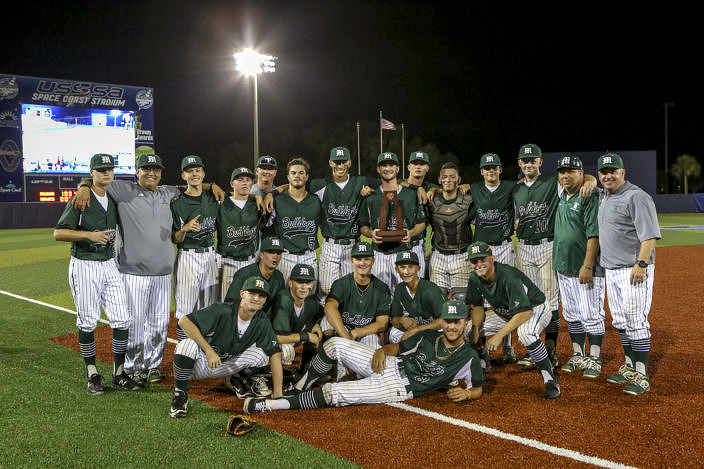 None of the current members of the team were even in high school the last time that the Melbourne Bulldogs hoisted a district championship trophy. But that short drought came to an end on Thursday night at Space Coast Stadium, as Melbourne shut out the Viera Hawks 4-0 to win the 7A-6 title.

Ridge Skarbek threw a complete-game shutout, holding Viera to two hits while also hitting two batters. The junior right-hander struck out one, relying on hid defense to take care of the rest. Melbourne did not commit an error on the night.

The Bulldogs (19-7) took the lead with the only run they needed in the top of the first inning. Jared Stevanus and Josh Ford both walked to put some ducks on the pond, and Peter Petracco came through with a base hit to left field that drove in Stevanus for the 1-0 lead.

Both sides dug in from there, as Viera starter Eric Allen held Melbourne off the bases over the next two frames. The Bulldogs chipped away for another run in the fourth, when Petracco reached on an error and scored on an RBI single from Nick Myers.

Skarbek made that small lead stand strong, and Melbourne gave him a little more breathing room with two more runs in the seventh. Myers walked, Jason Blackstone connected for his second hit of the night and Stevanus also walked to load the bases. Ford then reached on an error that allowed two base runners to score.

The extra run support provided Skarbek to take the mound with less pressure on his shoulders to record the final three outs. A liner to the third baseman and a ground ball to the shortstop tallied the first two outs, but Brady Janssen singled to center to keep the slim hopes alive for Viera (19-8). Another grounder to third quickly dashed any last miracles, as Melbourne lifted the district trophy for the first time since the 2014 season.

Both teams advance to the regional playoffs that begin next week. Melbourne will host New Smyrna Beach and Viera will travel to Pine Ridge in the 7A regional quarterfinals.