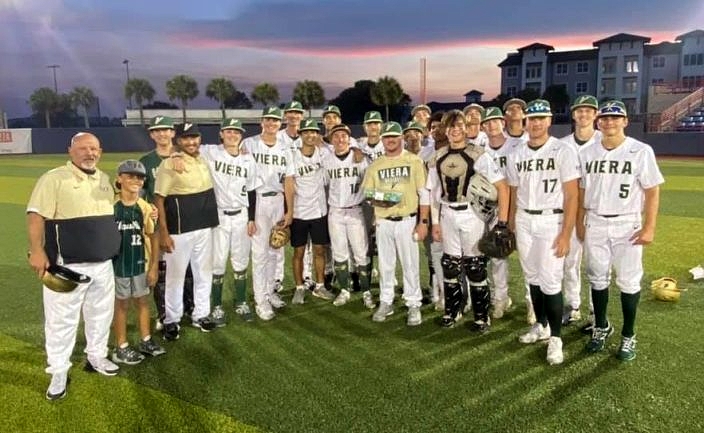 The Viera Hawks celebrated the 37th birthday of assistant coach Brock Doty the best way that any baseball team can on Tuesday night, with a solid win in a tight ball game for a 2-0 home victory over the Cocoa Beach Minutemen. David Rusnack and Liam Samuels combined for the shutout, after the offense staked an early lead with all its run in the first two innings.

Rusnack was tough on the mound in picking up his fourth win of the season. The left-hander needed just 88 pitches to get through six scoreless innings, and he allowed just two hits while recording 10 strikeouts.

Samuels was just as tough. The senior struck out a pair in a perfect 1-2-3 seventh inning to lock down the win and pick up his second save of the year.

Aidan Pryzgoda did his part in stride to keep the Minutemen in the contest. The senior southpaw went the distance on the mound, allowing two earned runs on three hits and two walks. He struck out 12 batters and needed just 97 pitches to go six full frames.

With just five total hits combined in the contest, the Hawks did just enough early on to account for the difference. Cole Teply walked and later scored on a wild pitch in the first, and Tommy Collins came through with an RBI single that drove in Jacob Vermeire in the second.