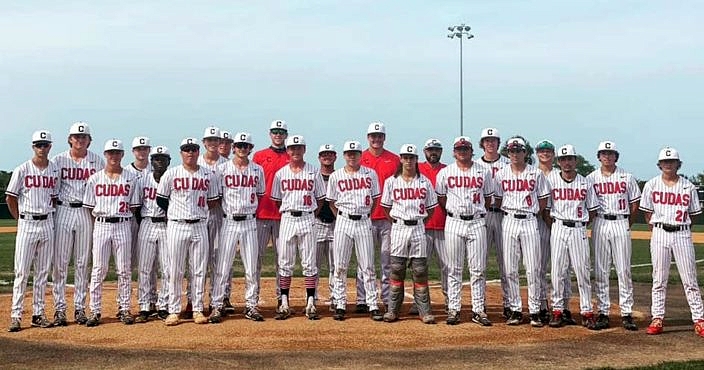 The New Smyrna Beach Cudas took as much momentum as possible heading into next week’s district playoffs, by rallying for two runs in the bottom of the seventh inning for a 3-2 comeback victory over the Lyman Greyhounds on Friday night. The Cudas (14-7) close out the regular season on a four-game winning streak, and they will host the Melbourne Bulldogs on Tuesday at Viera in a 6A-5 semifinal.

The Greyhounds (4-16) looked to play spoilers after rallying from a one-run deficit to take a 2-1 lead in the top of the sixth inning. In the fifth, Preston Hart singled and advanced to third off a sacrifice from Chance Fitzgerald and a ground out from Curtis Argroves, and a passed ball then allowed Hart to put Lyman on the scoreboard. An inning later, Dylan Loeb and Garrett Fulwood both singled, and an error allowed Loeb to score the go-ahead run.

Down to their final outs, the Cudas battled back for the win. The first three batters reached to load the bases, as Colbie Cagle reached on an error, Tyler West walked and Ausean Owens was hit by a pitch. Davin Landers then delivered a sac-fly RBI on a fly ball to center that allowed Cagle to tag up and score the tying run. After an intentional walk to Dominic Flacco, Liam Garvey made them pay by coming up with the winning hit, as he lined an RB single to left that drove West home to send them off victorious.

New Smyrna Beach opened the scoring with a run in the bottom of the first, on a sac-fly RBI from Flacco that drove in Owens.