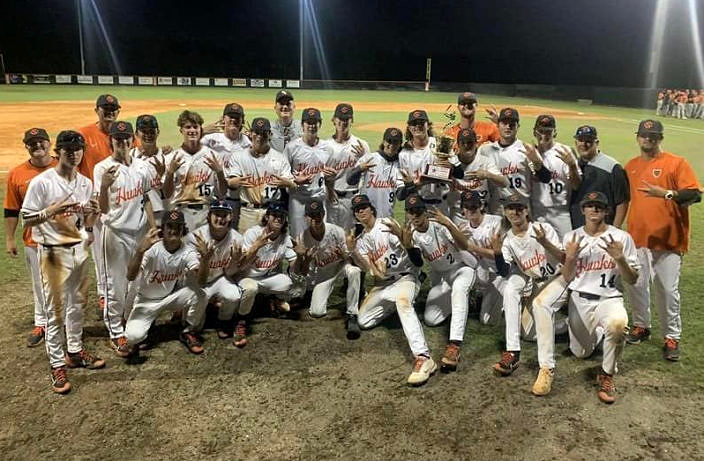 The 2022 Spruce Creek Hawks, together on the field for the final time. *Photo from Matt Cleveland.

The Spruce Creek Hawks had their sights set on returning to the state Final Four tournament for some unfinished business. The 2021 state runners-up made it back to the regional semifinals for an unprecedented fourth meeting with the University School Titans, who earned a 6-2 victory on Thursday to end the Hawks’ playoff run.

The host Titans (25-5) grabbed control with three runs in the bottom of the fourth inning, and then put it away with two more runs in the fifth. University will now travel to take on the top seed in Class 6A, the Pace Patriots (24-3), who defeated the First Coast Buccaneers 10-0 in the other regional semifinal to advance to a Tuesday meeting in Pensacola.

After falling behind 1-0 in the second on an RBI single from Andrew Korkus that drove in KJ Mctyer, Spruce Creek (19-9) rallied back to take the lead with both of its runs in the top of the fourth. After a pair of runners reached base on errors, Luke Tutunjian successfully stole home and Julian Braga drove in Tyler Boyeson on an infield ground out that gave the Hawks a 2-1 advantage.

But the Titans answered back with their next swings to retake the lead for good. After dropping both meetings during the regular season, University took the next two playoffs contests. The Titans also won the district championship to earn the home field advantage.